Corot and Courbet: Landscape Paintings or Self Portraits?

Jean-Baptiste-Camille Corot and Gustave Courbet painted within the same century. Corot lived his seventy nine years during a period of great turmoil and transformation in France, from 1796 to1875. Courbet, a product of the following generation, was born in 1819, and died at age 58, two years after Corot, in 1877. The French Revolution of 1789-1799 eliminated the Monarchy and launched a new era of ongoing struggle for individual freedom and equality, but it was specifically “the whole climate of progressive thought surrounding the 1848 Revolution” that instilled a great passion for democracy in the younger Courbet. (p. 22 Nochlin, p. 2 Robert Hughes) Both Corot and Courbet experienced the feelings of creative liberty during this transformative time and synthesized their realities in their painting with equal devotion though in distinctly individual ways. The two landscape paintings I have chosen to compare, The Oak of Flagey, painted by Courbet, and The Leaning Tree Trunk, painted by Corot, exemplify these artist’s very different realities and temperaments that seem to me to be more like self portraits than mere representations of nature.


Corot, began painting rather late, at age 26, around the time of Courbet’s birth, had a deep reverence for nature and was most influenced by the landscape artists of the eighteenth century at the beginning of his career. He was strongly attracted to the neoclassical style, where the landscape was imaginary and idealized and then soon after worked in the Barbizon style, where landscape painting became more realistic and intimate. Both styles “would form the heart of Corot’s method” and depended on the development of plein air study and studio work. (p 12 Pamarede)

Corot. The Arch of Constantine and the Forum, Rome, 1843 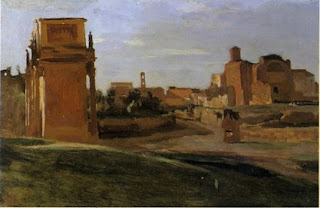 This painting, The Arch of Constantine and the Forum, Rome, ( p 216, Galassi) exemplifies his regard for the landscape and the plein air work that Corot did during his travels to Italy. Corot’s fresh and confident brushwork, which pays attention to the light, color and tonal relationships, exhibits the synthesis of what he was originally trained to do: to create cohesive and harmonious compositions, with plein air painting. (P 219, Strick.)

Known as “Papa Corot”, his reputation grew to be a modest, generous naïf who combined innate, instinctive sense of classicism with a heartfelt love of nature. (219 Strick)

His oil and pencil sketches that he did out in the landscape were what later became the inspiration and subject matter for his poetic work that he accomplished from memory near the end of his life. (p 12 Pamarede) In his mature work, the memory of his landscape studies becomes folded into newly invented worlds that reflected his own unique personality. 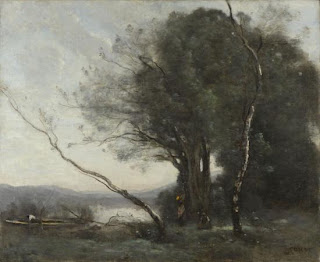 
An example of Corot’s mature lyrical landscapes is this painting, The Leaning Tree Trunk, which was painted somewhere between the years of 1850-60, according to the information on London’s National Gallery website. His composition contains a grove of large, gracefully drawn, intertwined mature trees that stand behind two birch trees. The large trunks create a backwards L to frame the space. Corot’s colors are grayed and neutralized, creating a velvety and subtle tonal symphony of gray greens, gray blues and grayish browns, with the bright cadmium orange on one figure’s head used to accentuate the presence of the figures and their quiet activities by placing it within the neutral opposing hues. The windswept birch was painted as a graceful diagonal across the front of the canvas and encloses the intimate space, using the other birch tree in the shallow foreground to frames the female peasants. These figures, one crouched, the other standing are apparently, (according to the National Gallery researchers in London), gathering twigs from the tree. The leaning boatman and boat provide a horizontal compositional counter to the lovely, vertical trees and along with leaning birch directs your eye to the left and up to the gray, wet, misty air that hovers within the wispy, air filled tree branches and around to the densely packed foliage. That dense foliage anchors the painting, as well as anchors the trees in their place. The tree forms are soft and diffused, making the tranquil atmosphere more important to the painting than describing the forms. Beyond the trees you see the silver lake and the distant undulating mountains. According to the researchers at the National Gallery in London, Corot was looking at Japanese art:


Corot took from Japan the idea of the screen in the foreground, in this case the tees, flattening the picture surface, through which one glimpses the distance. (nationalgalleryimages.co.uk)


Corot soft atmospheric effects evoke the quiet and calm emotion of this painting using a combination of close tonal pigment with smooth, thinly painted and wispy brushstrokes. His bucolic subject matter seems ideally suited to his technique. He used his plein air drawings of trees as his starting point, helping him to romanticize and become what he in fact called his “souvenirs”. (p 262 Tinterow) leaving behind the “actual” or “”real” in favor of residing in newly imagined a landscapes—poetic landscapes that seem serene, romantically peaceful and so inviting that want to remain in them for the rest of your life. This painting seems to reflect Corot’s quiet temperament and his sense of achievement towards the end of a rich and accomplished career. This painting reflects Corot’s character as described by Gary Tinterow in his essay; Le Père Corot: the Very Poet of Landscape:


He (Corot) prided himself on his modesty and found contentment in humility. Not for nothing did he reread the devotional book The Imitation of Christ every night before retiring. “It is this book that has helped me to lead my life with serenity and has always left me with a contented heart.” (p 272)


Courbet on the other hand, was determined to paint a new reality from the very beginning of his career. He was considered the founder of Realism— that is, of painting what existed, what you can see and touch, whether or not it was pleasant or agreeable. He worked with determination to develop a style that reflected his own flamboyant ego and his freedom to think for himself. Robert Hughes wrote about Courbet’s character in his 1988 Time Magazine article: Art: An Abiding Passion for Reality Gustave Courbet, where he writes:

This combative, ambitious, narcissistic and earthy man crazed about women, convinced of his own historical mission ---thought he was the painter of his time. “I am Courbetist, that’s all. My painting is the only true one. I am the first and unique artist of the century; others art students or drivellers’.


His paintings contain subject matter that often shocked contemporary viewers, since he was one of the first to reflect real conditions of life that incorporated references to his political views. His freedom to act and think for himself, and reflect those views in his work, were of paramount importance to him and he drew criticism from the conservative art critics of his day. (p 22, Nochlin)

Courbet completed this painting, the Oak of Flagey when he was 45 years old, in 1864. Linda Nochlin states in her essay Courbet and his Territory: How Landscape Means, that “it is a remarkable portrait of a remarkable tree” and “not quite like any other tree painting of it’s time”. Nochlin goes on to say that it was painted at a time when many of the most interesting artists were painting landscape motifs.


Courbet placed the tree at dead center, making it the sole focus of the work, painted with careful and concrete attention to form. The strength and density of the image comes from Courbet’s very accurate rendering. Courbet’s brush work is thick, energetic and deliberate. He used his palette knife to lay the paint on the surface, mimicking the light and the thick bark on the tree. By placing the tree front and center he almost exaggerates its importance. The cropping of the top branches forces the eye to focus on the massive trunk. The trunk is the strength, the core and the foundation for the branches and the dense foliage, which feeds the trunk by reaching to the sky for light and air. The roots are massive, lit up with thicker paint to accentuate their important role in anchoring the trunk. His colors are mixed carefully, using close tonal relationships, much like Corot, from dark to light. However, Courbet’s rich greens and browns are more intense than those found in Corot’s foliage. His greens and browns are rich, thick and cover most of the canvas. The sky breaks through here and there, letting us know there is space beyond the tree’s heavy presence, but that it can be reached only by passing through massive amounts of heavy branches and dense canopy. Courbet reveals bits of the mountains in the background, and this pushes the tree forward yet his composition lacks traditional three point perspective. He paints every inch of the canvas with equal importance, using the trees that flank the oak, that although smaller in scale, create the distance needed to accentuate the presence of the main character. There is a white dog chasing a rabbit, a scene that creates a sense of transience, for Linda Nochlin, and that is used as a foil to once again to accentuate the solidity of the Oak.

“tiny harbingers of instantaneity, they emphasize the oak’s endurance by suggesting the opposite, the ephemeral existence of living beings. Yet of course the oak is living too. But the time scale is different, presented as an opposition by the artist”.

Nochlin states that during the time it was painted, Courbet was aware of the symbolism of the oak tree in contemporary society, for the oak was in fact a symbol of masculinity, virility, and majesty. Although he may have intended to simply paint a landscape, hidden meaning prevails as a result of Courbet’s strong sense of self. His inner sentiment rose out of himself when he worked, as did Corot. This painting of the oak represents Courbet, a strong, solid unwavering individual, who was asserting his democratic, artistic and masculine beliefs for the entire world to see. A man with “a battleship of an ego” as Robert Hughes states in his previously mentioned Time Magazine Article, or a man with a massive oak of an ego, that stood solid and defiant against his art critics and political opponents of his day. Linda Nochlin states that:

He has created a kind of self-portrait of the artist as an oak tree, rooted firmly in the ground, energetic and powerful, outreaching and expansive in his generous creation. Nature and artist, landscape and art have assumed a single identity here.

Corot and Courbet shared a strong devotion to painting and nature. Both were concerned with representing people, places and things that pertained to the common man, at a time when there was much change in the political climate. Corot was apolitical, yet worked ceaselessly with a calm, steady perseverance and reverence for nature that resulted in a full, serene and mature life that was clearly reflected his paintings. Courbet’s work reflected a brazen, jolting and specifically democratic sentiment, where his ceaseless energy and stubbornness prevailed in his “realistic” forms that often contained unsettling truths of nature and allegories of himself, sometimes seen as self portraits. Their temperaments are reflected through their work— temperaments not the same, but equally driven, innovative and brilliant.

8. Strick, Jeremy, Nature Studied and Nature Remembered: The oil Sketch in the Theory of Pierre-
Henri de Valenciennes. In the Light of Italy, Yale University Press, 1996. Print.
Posted by K Jacobs at 9:22 AM No comments: Links to this post 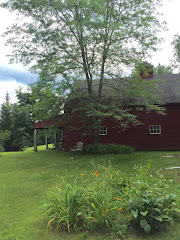 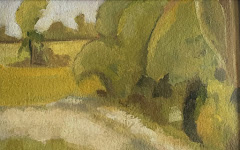 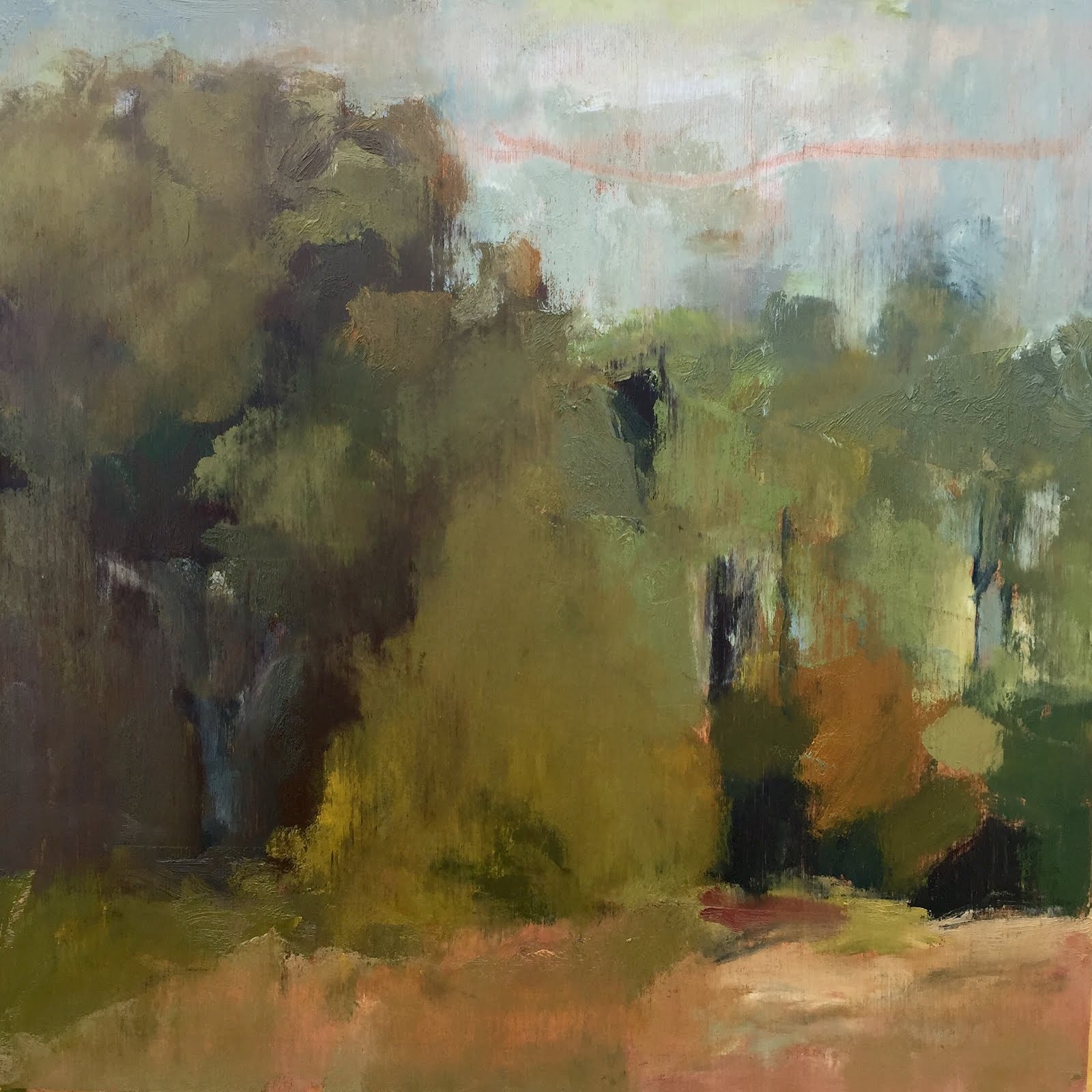 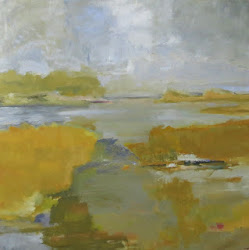 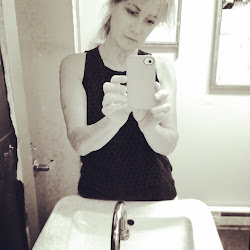 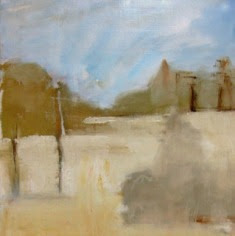 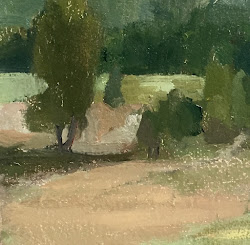 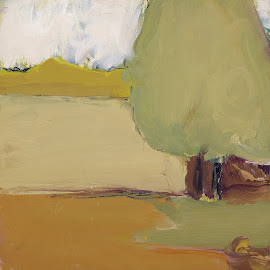